Introduction of new Supernote Pen with permanent use ceramic nib

The digital pen is new input tool, digitizes handwriting for preserving traditional pen touch as premise. However, the tactile feel of digital pen is heavily dependent on the design of pen nib.

In 1984, when WT-460M, the first digital board with stylus was released, people have been exploring the nib of digital pens since then.

To date, most of pen nibs for digital handwriting and tablet devices were made of soft material including Microsoft Surface and iPad series stylus as one key selling point, so why does this matter?

In 2012, Microsoft released Surface Pro as "notebook replacement", and its main sales point lies in attached digital pen- the Surface Pen. The Suface Pen pen nib is made of soft rubber and plastic, which creates a sense of friction when writing on hard cover glass display.

However, people found that the damping of soft pen rubbing against hard screen is far from the damping sensation of traditional paper and pen. In fact, when paper comes into contact with traditional pen, the fibers inside of the paper undergo a dynamic process of diffusion and recovery under compression, but soft rubber plastic pen nib is not possible to achieve same result.

Later, Microsoft introduced nib kit for offering variety of nib materials to choose from, especially harder ones made of felt and plastic nibs compared to previous one. But due to high hardness of the cover glass, new nibs are still not as hard as they could be to prevent scratching of the screen. This remains an unresolved problem in digital pen industry – nibs wear out fast. 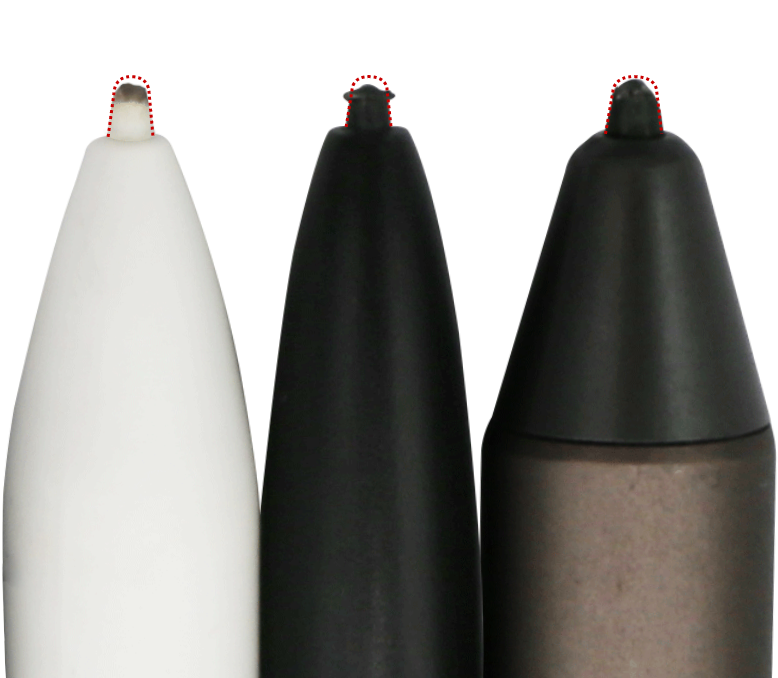 High frequency of friction between soft nib and hard screen causes nib worn out easily. Many digital pen users need to replace nibs every two months in average, and some users with heavy pen pressure habit need to replace the nib even every week. Replacement of nib or refill, with the continuously extra expenses, has deterred many people from using digital pens.

When the nib wears out or turns dirty, do you replace it or not?

Stylus nibs are constrained by low-strength materials that have to be made big dimension nip, which wears out faster, and the cone shape of nibs becomes even bigger and miserable after worn out.

How to solve it?

The root cause of soft digital pen nib is hard cover glass screen, is there any solution to make screen soft?

Keeping this in mind, Supernote, the leading brand of "eNote", has come up with the answer – hard pen with soft film.

The implementation of Hard Pen + Soft Film not only optimized the feel of writing on digital paper and pen dramatically, but also brought the product life of digital pen to an unprecedented level – can last a full year in average or even longer.

Supernote, the brand that pushes the limits of technology always, is never satisfied.

Supernote is a product of user experience-focus. We believe that even with one year or longer life span, nibs worn out and damage are still users’ major concerns.

During countless experiments, we tested high-hardness materials such as stainless steel, nickel-titanium alloys, and finally found the flexural strength of zirconia ceramic 1100 with a hardness of 88 - 90 HRA (Rockwell hardness), which is close to the hardness of sapphire and is fit as synthetic material for the tip of electromagnetic digital pens. With Supernote's original FeelWrite self-recovery film, the new nib material does not cause scratch nib worn out as well.

The first digital pen that truly "never wears out".

This next generation of permanent use ceramic nip Supernote pens will be launched today globally along with the Heart of Metal and the Standard Pen series. There will be a full upgrade to ceramic nibs, and the price remains same level as first-generation.

The ceramic raw material color is white, in order to look more like a real pen, we have gone the extra mile and made it black! The black glaze new nib looks similar to the first-generation POM material, has been engraved on the pen.

Look back the evolution of the digital pen history, the spirit of discovery and innovation has driven technology revolution. As a product made for writing, Supernote keeps steadfastly creating better digital handwriting experience for users. The "Ceramic Pen" is a milestone in the field of digital stylus for Supernote.

In other areas of digital writing, what else can Supernote create to push the limits? Let’s wait and see. Stay tuned.

There are no comments for this article. Be the first one to leave a message!

We like getting letters rather than doom scrolling through social media. Maybe you do too?